The location of the Ontario Train Depot was chosen by Baker City developers William Morfitt, Mary Richardson, Daniel Smith, and James Virtue when they laid claim to four sections of desert land in anticipation of the coming Oregon Short Line Railroad. These claims were filed in Baker City on June 11, 1183 and Ontario was thus founded. A wooden depot was constructed in 1883-84 at the time when the railroad was being constructed to connect with the Oregon Rail & Navigation Company located at Huntington, Oregon. Travelers from our area could finally ride the train without having to travel to Winnemucca, Nevada to board.

Passenger service was initiated in January of 1884 allowing connection to the transcontinental railroad near Salt Lake City, Utah. This connection encouraged agricultural expansion of the local area because of the link to Eastern markets. The depot also resulted in growth for Ontario as the focal point for communication and commerce with the rest of the world. The depot provided local employment and at one time employed fifty people handling freight and livestock from as far away as Burns and John Day. The well-developed agricultural base of the local economy can be directly attributed to the railroad. During the World War I this depot was the largest shipper of wool in the nation. 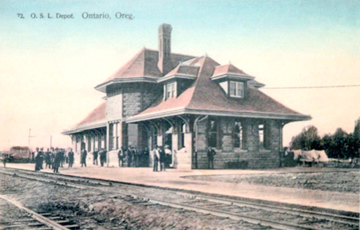 The present Edwardian style train depot was built in 1907 at a cost of $45,000. The building's exterior has remained exactly the same and is in sound condition. Since 1907 thousands of people have passed through the depot, especially during World War I and World War II. It provided a stopping point for many notables such as Presidents Franklin Roosevelt, Harry Truman, and Presidential Contender Robert Kennedy. It was also the site of noteworthy events such as a destination point on the first transcontinental automobile crossing of the United States in a Winton car. During both World Wars the depot was a hyper center of both civil and military activity.

In 1970 passenger service was halted followed later by the termination of freight service. The ceasing of service from the Ontario Depot led to its deterioration, as it became a haven for pigeons and homeless people. Many locals felt that it was the seed for downtown blight. In fact, Union Pacific Railroad considered demolishing the Ontario Depot to rid itself of taxes and liability for the structure.

After a long and concerted effort by a group of volunteers and members of the Ontario City Council, Union Pacific Railroad was persuaded to donate the depot building to the City of Ontario and did so in 1997. The City Council and City Manager Dick Cline recommended that the Depot volunteers become a 501(c)(3) non-profit corporation independent of the City to serve as an entity to raise funds and manage restoration of the depot for public use. This designation would allow for maintenance and restoration at little or no cost to the taxpayers of the City of Ontario. Many thousands of man (and woman) hours went into the restoration project with a grand reopening of the central and south portions of the ground floor in December of 2000.

Since the reopening many small groups have made use of the building. Accessible user fees have in turn assisted in the upkeep of the depot facility. The restoration effort received the support of every civic organization in the City of Ontario and countless individual efforts. It was an extremely successful community-wide endeavor. In 1999 the Ontario Train Depot was added to the National Registry of Historic Buildings and is now something in which the entire Valley can take great pride.

The Ontario, Oregon, Basque Club, Inc., a 501(c)(3) organization, assumed responsibility for maintenance and supervision of the Ontario Train Depot from the Ontario Train Depot Restoration Committee on November 10, 2007. Through grants, donations, and their own labor, the Basque Club renovated the north portion of the main floor for use as a headquarters. They also funded the relocation of the Union Pacific Office to its current location. The Basque Center was opened in 2007. Subsequently, the Basque Club built a staircase and opened up the attic space, the largest portion of which is available for public use, and the remainder reserved for Basque Club activities through a lease agreement with the city.

Although freight trains still travel the tracks behind the building, the depot no longer serves its original purpose. Today it serves the community as a venue for meetings and celebrations.